Despite the culling of our iguanas, a few have obviously been smarter than the guy with the gun.

Young iggy is still bright green, but he’s already learning to keep a lookout for danger.

“Stepping out with my baby” are Ignatius and Igua, who in time will no doubt give the Iguana Control guy a run for his money.

Wishing you all a great rest of the week.

Looks like Mrs Penny Pelican has flown in to join her mate Perry, now that he’s sorted out their digs for the winter.

On their way back upstream, they were accompanied by an entourage of birds. The Great Egret led the parade, whilst Mr GBH proudly ‘rode shotgun’. The ducks, paddling for all they were worth, brought up the rear. It was quite a show.

The tri-coloured heron just looked on in astonishment.

For Debbie’s ‘Six Word Saturday’. Apologies that the photos taken through my bathroom window, aren’t the sharpest.

Hope your weekend is going well. 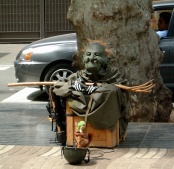