This morning, Woody wood stork came striding purposefully through our backyard and from the determined look in his eye, he was most certainly on a breakfast hunt. I pity any poor fish who are unfortunate enough to come into contact with that beak. 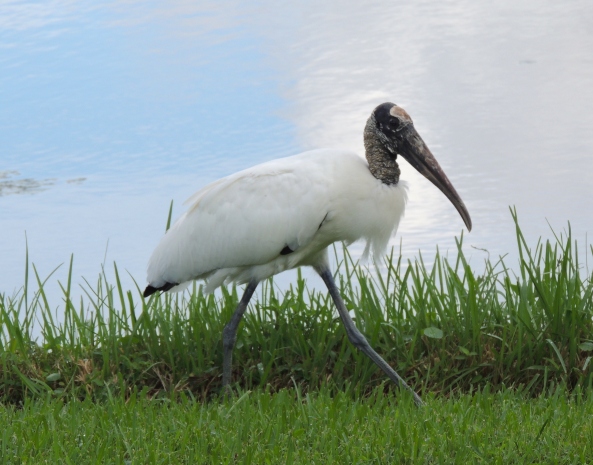 With his ugly, dark grey, wrinkly, bald head, it’s unlikely that he would win any beauty contests, but having such a menacing face which only a mother could love, probably accounts for the fact that wood storks are rarely preyed upon, even by alligators.

Wishing you all a very pleasant Sunday.

Just outside our kitchen window is the rather sad remains of a water feature and rockery. Now that our ‘abandoned house’ renovations are almost completed, this area will soon be enclosed in the new screen room which is now under construction. We intend to put some Koi in the pond and build a nice rockery around it. Unfortunately for our wildlife creatures, they will no longer be able to sit ‘atop the rock’. I’ve so enjoyed photographing each and every one as they’ve posed for me here.

Samantha squirrel often sat atop there to eat her breakfast.

Sammy also liked sitting there, when he wasn’t busy dashing up and down palm trees.

Rockstar Iggy, so enjoyed displaying his finery atop the rock. 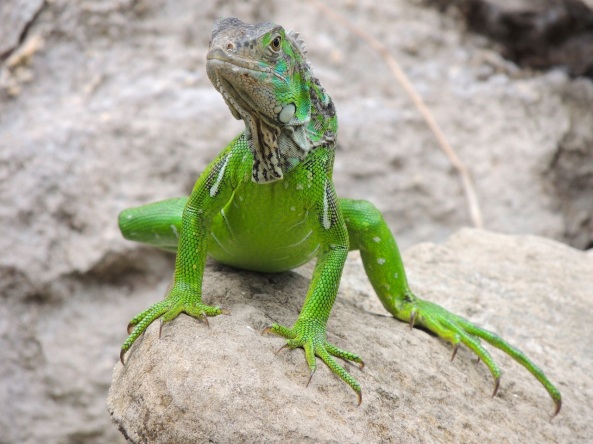 Grandpa Igasho often took the opportunity of showing off his handsome visage and especially his mohawk, atop the rock.

Sweet little Anatole, enjoyed sunning himself whilst displaying his dewlap, atop the rock.

I guess it will be the end of an era, once the construction is finished. There’ll be no more photos taken through my kitchen window. I think I’ll be rather sad about that, and so will my gorgeous visitors, but at least I’ll no longer be tempted to have a go at cutting their toenails.

To see more contributions for the ‘Atop WPC’, click here.

Well, I really am not at all popular with Mr. GBH. He stopped by to tell me that he was very miffed about not getting a mention in my ‘ Singles’ Weekend’ post.

I tried offering my most contrite apology, but he just turned his back on me.

Suddenly he flew over to the far side, to sun himself on his favourite branch. ” I can’t understand why ‘Magnificent Me’ is still single, but I’ll sing you a song, and it won’t be any “Song Sung Blue” either. Get a load of this, lady!”

That will teach me never to forget to include Mr. GBH in my ‘Backyardigan’ posts. 🙂

It seems that we are being taken over by Iggys these days. Everywhere I look, there are green heads popping up out of the grass, and also peeping at me though the palm tree trunks. “Hi there!”

Igasho is the Grand-Daddy of them all, and lately he’s been spending a lot of time lazing around in our backyard. 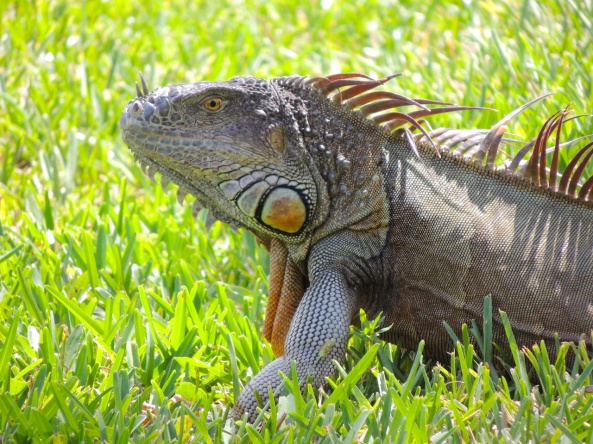 He’s beginning to turn orange, which probably means that he’s looking for a mate. Yesterday, I went outside to have a chat and he turned to see who was approaching. 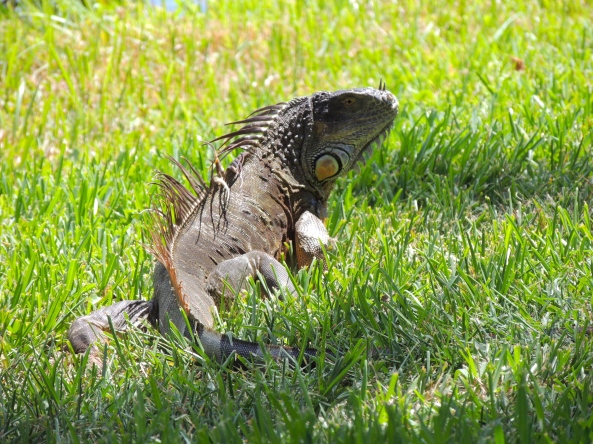 I guess I’m just not his type, because he rather rudely turned his back on me and stalked off with his nose in the air. 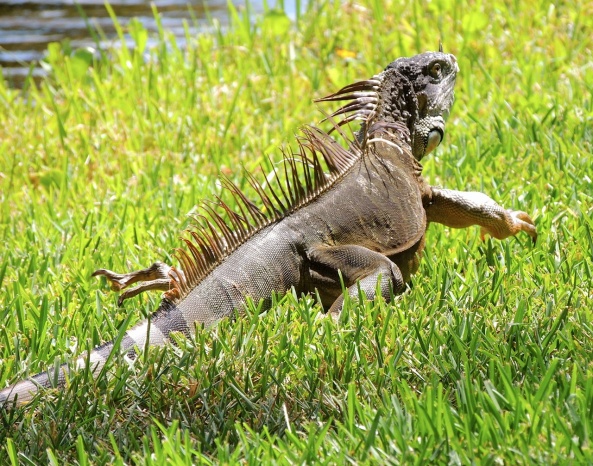 Happy Tuesday to you all. Tomorrow i have a very much smaller wild thing to show you.

For this week’s Photo Challenge, Cheri says “Get inspired by the curves around you. From curves in architecture to bends in nature to man-made undulations.”

I think the most impressive curved piece of architecture I’ve ever seen, is the Colosseum in Rome. Opened in AD 80, it was the largest amphitheatre of the Roman Empire, and for many years was the site of gory combats between man and beast.

Not too far away from the Colosseum, in the heart of  the Vatican City, is the curved dome of St Peter’s Basilica, designed by Michelangelo and completed in 1590, twenty-six years after his death. This is the largest dome of Christianity in the world, being 136m high and 42 m in diameter.

Not to be outdone, today hubby is busy spackling his dome, which is nowhere near as big or fancy as Michelangelo’s, but a lot of work nevertheless. I hope it doesn’t take 44  years to complete.

In Barcelona are many examples of the gorgeously curvy architecture of Antoni Gaudi. In 1984, La Padrera one of Gaudí’s main residential buildings which has to be one of the most imaginative houses in the history of architecture, was recognised by UNESCO, as World Heritage

Man has designed beautiful curves, but Mother Nature really does have the best curves of all, and here is a beautiful curve of a rainbow at Victoria Falls in Zimbabwe. 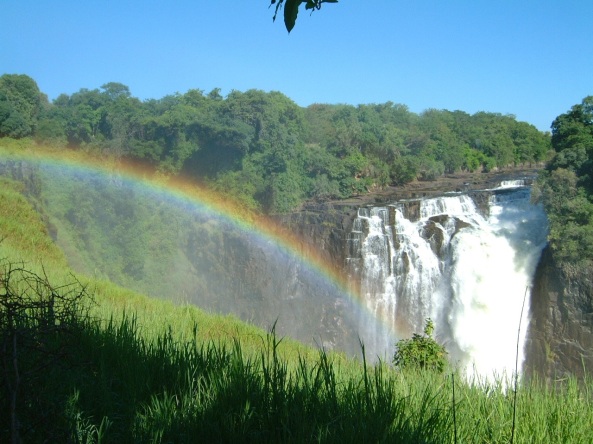 My post wouldn’t be complete without a couple of my Backyardigans, Tommy and Theresa the painted turtles, with their perfectly curved homes which they carry around on their backs.

I hope you’re all having a wonderful weekend. Tomorrow I’ll have to prise hubby away from his work on the house, and take him out for a Father’s Day dinner.

My good friend ‘Restlessjo’ of the ever-wandering feet, had the temerity, or should I perhaps say “impertinence” to tell me that my speciality is “snooping on small creatures”! I guess she’s right, although I’ve never thought of myself as a ‘snooper’. I prefer to call it “observing and recording the peculiar habits of my Floridian Backyardigans.”

This morning, I was just walking to the laundry room, through the obstacle course which is my future living area, when I happened to glance out of my kitchen window. (Yes, it won’t be too long now before I actually have a kitchen.)  Ther in full view, was Ignatius stretched out in the sun on top of what I hope will one day be a beautiful water feature.

Creeping up on him was Igua, his great admirer. 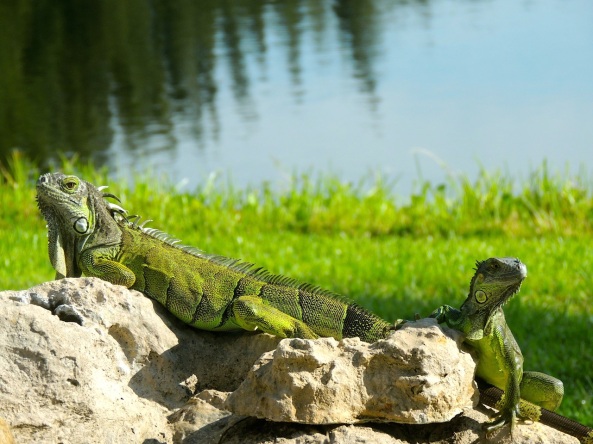 She looked around to check whether Uncle Igasho was watching her advances, but he had abdicated his chaperone duties for the morning, and was  resting in the shade of a palm tree

The two iguanas sat sunning themselves in companionable silence for a while until hubby decided it was time for him to wheel his electric saw outside and make lots of noise cutting up pieces of wood. That put an end to my ‘snooping’, and the loving couple skedaddled as fast as their legs could go. Even Uncle Igasho woke from his daydreaming and retired to the safety of the reeds at the water’s edge. I think he looks slightly miffed at being disturbed.

Wishing you all a very happy and relaxing Fathers’ Day  weekend.

For Jithin’s ‘Mundane Monday Challenge’, he asks us to frame a mundane object to make it look beautiful.

Maybe iguanas aren’t mundane to your life, but in my backyard I can usually see at least three or four of these strange creatures at any one time. Looking out of my bathroom window, as I often do these days, I spied Iggy Jr. framed between two palm tree trunks. He had such a hopeful expression on his cute little face, that I wanted to go out and ask him what he was wishing for. Whatever it was, I hope his wish is granted.

Happy Monday to you all. Tomorrow i will reveal my exciting Saturday purchase, so “stay tuned,” as they say. 🙂

Ramses and Nefertari, two fine examples of Egyptian Geese, showed up in my backyard yesterday.

I could also link this to Jude’s ‘March Wildlife Garden Photography Challenge’, but maybe she’s getting tired of seeing so many of my visitors. 🙂

Wishing you all a sunny Sunday. 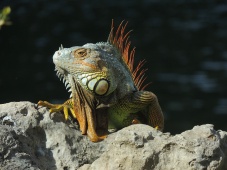 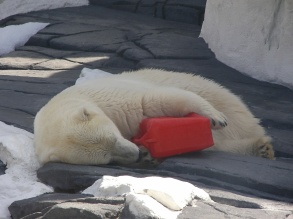 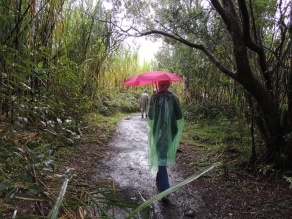 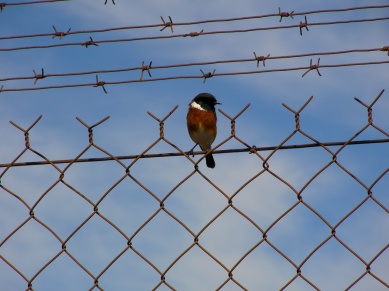 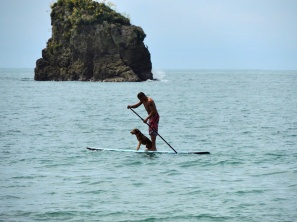